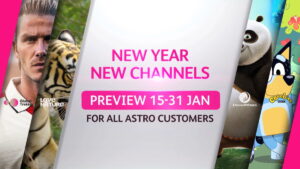 Astro has made several channels available for free viewing regardless of the customer’s subscription tier. Done in conjunction with yet another successful outing at the Putra Brand Awards, customers can view all of these channels starting today, 15 January onwards through their TV as well as the Astro GO app.

With 10 channels in total, five of them have been part of Astro’s stable for quite some time. They include two global news channels: CNN HD (channel 511), and BBC World News HD (channel 512).

Also part of the list is the CJ E&M-owned channel, tvN HD (channel 395) which mainly focused on hits show from South Korea.  Another Asian-oriented channel that is now available for free viewing is Astro’s horror depository Boo HD (channel 404) and for those who love English blockbusters, there is also Showcase Movies (channel 413).

Throughout the free viewing period which will last until 31 January, the long-time multi-format pay TV operator will also include four new channels for customers to preview at no extra cost. Among them are two children’s channels including BBC’s CBeebies (channel 620) and DreamWorks (channel 622).

In addition to that, free viewing is also available for Love Nature (channel 558) which as you may be able to guess from its name, focuses on animals and nature. Customers with Astro Ultra Box can also access its ultra high-definition variant called Love Nature 4K on channel 549.

Summing up the list is Global Trekker (channel 559) which is another channel that came from Singapore-based Rock Entertainment, just like Love Nature. This particular channel offers factual content that covers a variety of topics from travel to technology.

Specially for the upcoming Chinese New Year, Astro has also established a special pop-up channel called Too FUN on channel 100. Featuring a highly curated Asian variety shows, dramas, and movies to match the occasion, customers are able to view it up slightly longer than the other channels we have mentioned earlier, which is until 12 February 2023.