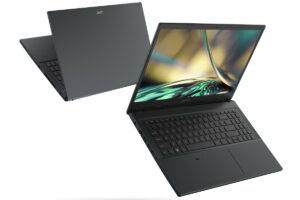 Acer has expanded its Aspire laptop line-up with the 12th Intel Core processor in Malaysia by announcing the latest variant of Aspire 7 for our market. Prior to this, the Alder Lake family of chips was first made available for the 2022 Aspire series via Aspire 3 and Aspire 5 which were launched in Malaysia back in August.

Unlike the previous two models which can be obtained with several hardware specifications, Acer currently provides only one spec option for the 2022 Aspire 7 (A715-51G-56FY) in our market. It is inclusive of an Intel Core i5-1240P processor and NVIDIA GeForce GTX 1650 graphics with 4GB GDDR6 VRAM as well as 8GB of DDR4 system RAM and 512GB PCIe NVMe solid state drive.

Similar to the previously released Aspire 3 and Aspire 5, you would see the elevated hinge on the Aspire 7 as well which provides an ergonomic tilt for more comfort. Acer also claimed that the elevated design can help improve air ventilation and audio performance.

Furthermore, the Aspire 7’s keyboard also has air inlets to help improve the laptop’s heat dissipation capability. Owners can also switch between three fan modes that include Silent, Normal, and Performance at any given time by just pressing the Fn + F combo keys.

With a battery life of up to 8 hours that is delivered by its 50Wh 3-cell battery, the inclusion of the 12th Gen Intel Core processor for the model has also brought Thunderbolt 4 support to the laptop’s USB-C port. Priced at RM3,899, the Aspire 7 with 12th Gen Core i5 chip can be obtained through Acer Malaysia’s own eStore as well as authorized Acer retailers nationwide including on Shopee and Lazada.