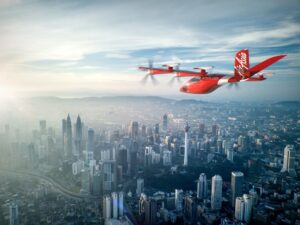 AirAsia has signed a memorandum of understanding to lease a minimum of 100 VX4 electric vertical take-off (eVTOL) aircraft from Irish firm Avolon. The two companies will work on getting local certification and researching the potential for commercialising an urban eVTOL ride-sharing platform.

The VX4, developed by British aviation company Vertical Aerospace, is a zero-emission piloted aircraft that can fit four passengers and has a range of over 100 miles with a top speed of 200mph. It is claimed to be near silent when in flight and is apparently so low-cost per mile that it only costs passengers slightly more than a regular taxi.

Avolon pre-ordered a total of 500 VX4s from Vertical last year, and has made deals to lease 450 of them to AirAsia, Japan’s JAL and Brazil’s Gol. The aircraft is still in development, with a target of 2024 for commercial use.

Capital A CEO Tony Fernandes told Bloomberg last year that the company had ambitions to launch its flying taxi service in 2022. No timeline has been given with the Avolon MoU announcement, but AirAsia noted that the venture will leverage on the company’s Super App, which recently launched a ride-hailing feature in Malaysia after acquiring Dacsee.