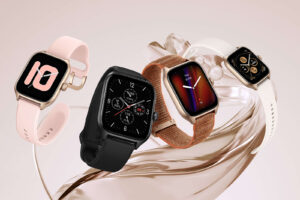 Amazfit announced a pair of new smartwatches to its lineup, the GTR 4 and GTS 4. Both devices share many similar features but differ in their design, display, and even their battery capacity.

First up, we have the GTR 4 which has a circular shape and a 1.43-inch 466×466 AMOLED display with two physical navigation keys on the side, including a crown. On the other hand, the GTS 4 sports a rectangular design with a 1.75-inch 390×450 AMOLED display and only a navigational crown.

The Amazfit watches run on Zepp OS as per usual but where it differs is that the GTS 4 only comes with over 150 watch faces, whereas its round counterpart supports over 200. They also support 2.4Ghz Wi-Fi, Bluetooth 5.0, Bluetooth calling, and can store about 2.3GB of music for offline listening.

Of course, the wearables come with all the typical bells and whistles when it comes to health features, which lets users monitor their heart rate, sleep, blood oxygen saturation levels, and more. Fitness-wise, both can track more than 150 sports, automatically detect eight types of exercises, and even support fall detection. The smartwatches also come with built-in GPS and have 5 ATM water resistance, making them suitable for most of your workout needs.

When it comes to battery life, the GTR 4 has a 475mAh battery which can last 14 days with normal usage and up to 50 days on clock mode. Meanwhile, the rectangular GTS has a much smaller 300mAh battery, lasting only eight days with typical use and up to 30 days with clock mode enabled.

The Amazfit GTR 4 and GTS 4 retail from US$199.99 (~RM899), coming in a variety of colours and strap materials. While they are initially launching just in the US, the company announced that both devices will be making their way to Malaysia in late September, although they have not revealed the local pricing just yet.