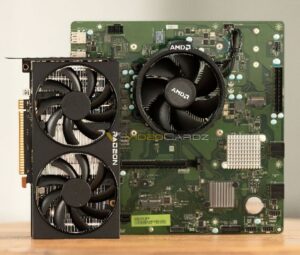 Photos of what appear to be closeups of an AMD 4800S Desktop Kit recently appeared online, prompting speculation that the kit is set to be the follow-up to the 4700S Desktop kit, which itself is a slightly different version of the board used in the Sony PlayStation 5 (PS5) and Microsoft Xbox Series X and Series S.

According to the hardware specifications provided to Videocardz, the 4800S will still be based on AMD’s 7nm Zen2 process but will sport some significant changes in terms of external hardware support. By that, we mean that the 4800S’ logic board will have a PCIe 4.0 slot that will reportedly support a Radeon RX 6600 graphics card, which is also to be bundled with the Desktop kit.

In addition to external GPU support, the 4800S is also expected to feature an M.2 slot – presumably for SSD support – and a Wi-Fi card, meaning that enthusiasts can finally use the Desktop kit as a proper desktop system. Oh, and the micro-ATX-sized kit will also support AM4 CPU coolers too.

At the time of writing, Videocardz’ source says that the AMD 4800S Desktop Kit is expected to launch within the first quarter of 2022. The Desktop Kit will be manufactured by MSI and will be bundled with a PowerColor Radeon RX 6600n graphics card. We don’t know if the kit will officially be sold in Malaysia, but as of late, we’ve actually seen some local tinkerers and PC enthusiasts who managed to get their hands on a 4700S Desktop Kit, so anything is possible.