Earlier today, AMD launched its refreshed Radeon RX 6000 series of graphics cards. In total, the chipmaker is releasing a total of three cards: the Radeon RX 6950XT, the 6750XT, and the 6650XT.

The announcement and names of the cards are self-serving and leave little to the imagination: each of the three cards are technically faster, slightly more refined versions of their predecessors, the 6900XT, 6700XT, and 6600XT.

On paper, the internal specifications are identical to their predecessors: we’re still looking at the same amount of graphics memory for each respective cards, as well as the same number of Compute Units (CU) and Ray Accelerators (RAs). What sets them apart, however, is their juiced up game clocks and effective memory bandwidth, which is essentially what allows them to clock in higher framerates that both their predecessors and equivalent counterpart. That, along with their slightly more demanding TDP as well.

To break it down a little bit, AMD claims that the 6950XT with its 335W TDP, higher game clocks and memory bandwidth offers better performance-per-watt and performance-to-dollar ratios when compared with NVIDIA’s own RTX 3090 Ti. Even if the provided charts seem to show them playing tag with each other. To that end, AMD also shows the performance improvements of each 6x50XT unit once Smart Access Memory and Radeon Super Resolution (RSR) is applied. 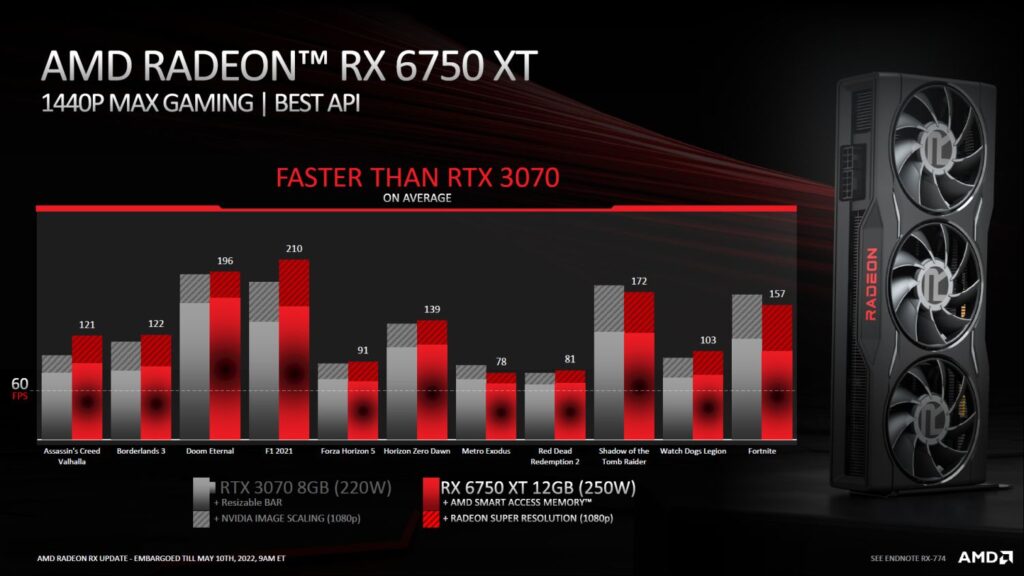