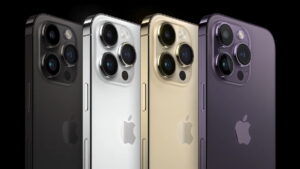 As previously covered, users of Apple’s newly launched iPhone 14 smartphones have noticed an issue with the imaging system on the Pro and Pro Max models, where the camera would rattle and cause disconcerting noise when used with third-party apps. In light of this, the company revealed in a recent update to its website that a fix for this is currently in the works.

It was previously unclear whether the issue is caused by the apps themselves or the phone’s hardware, but given that Apple has announced an update is incoming in a way confirms that it has been the latter all along. However, the company did not disclose what exactly is causing the problem, though it is speculated that it could be related to the optical image stabilisation system on the iPhone 14 Pro and Pro Max. Interestingly, users of the non-Pro variants of the series have not encountered this issue as far as we know. This is likely because the standard models are using an older version of the stabilisation system, which have already been optimised beforehand.

Just in case you missed it, complaints regarding the rattling and noises caused by the cameras on the iPhone 14 Pro and Pro Max have been pouring as of late. While the imaging system seemingly works flawlessly with the iPhone 14’s own camera app, the same can’t be said when using the built-in camera function on apps such as Snapchat, Instagram and TikTok. One way to bypass this is to snap photos or record videos via the first-party approach first and only upload them on social media platforms afterwards. But depending on who you ask, this method can be a bit tedious as it involves multiple steps.

This isn’t the first time that Apple had to address camera issues on the iPhone 14 series either. Last week, the company’s iOS 16.0.1 update contained a fix for the Pro Max’s imaging system which caused some photos to appear “soft” when shooting zoomed-in subjects in landscape orientation.

As for the upcoming update itself, Apple did not provide an exact date for its release but promised that the patch will arrive sometime next week. Whether it will actually solve the issue once and for all remains to be seen.