Less than two years after launching the M1 which is the company’s first SoC, Apple today has unveiled the successor to the chip, the M2. The new processor is one of several major announcements that took place during the keynote at the Apple Worldwide Developer Conference 2022.

Just like M1, the company said that it continues to focus on power efficiency while maximising the performance of the second-generation Apple Silicon release. Despite still using 5nm architecture, Apple noted that the M2 has an increased number of transistors at 20 billion which is 25% more than M1.

This helped unlock 50% faster unified memory bandwidth at 100GB/s for M2 which can be obtained with up to 24GB of memory. Aside from that, the CPU, GPU, and Neural Engine on M2 have more cores than their counterparts on the M1.

Specifically, the M2 carries a 10-core CPU and 16-core Neural Engine while it is available with up to 10-core GPU. The new chip also features a media engine that seemed to be on par with last year’s M1 Pro since it provides hardware acceleration for H.264 and HEVC at resolutions as high as 8K, alongside the support for ProRes encoding and decoding. 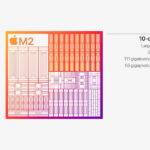 Apple also said that the larger cache for both CPU and GPU on the SoC alongside faster performance CPU cores and improved memory bandwidth are among the contributing factor that made the M2 superior to M1. For example, the new chip can deliver 18% more multithreaded performance than its predecessor.

Graphics-wise, Apple claimed that the M2 can offer up to 35% faster performance than the M1 although the improvement dropped slightly lower at 25% when compared at the same power level. On the hand, M2’s Neural Engine is able to go through 15.8 trillion operations per second which made it 40% more powerful than its M1 equivalent. You don’t have to wait long to see the M2 in action though as Apple has confirmed that the chip will be made available via the equally new MacBook Air and MacBook Pro 13. Both laptops will be rolling into the market starting next month although the exact release date for them in Malaysia is not yet known at the moment.