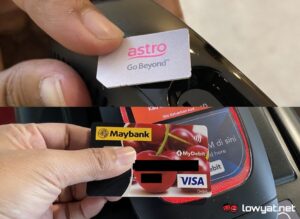 Several databases that contained personal data from millions of Malaysians have been put up for sale earlier this month. The data was apparently sourced from several high-profile organizations including Astro, Maybank, Election Committee (SPR), and TM according to the sellers.

Given the severity of the claim, it immediately captured the attention of the authorities. In fact, Communications and Digital Minister Fahmi Fadzil has instructed CyberSecurity Malaysia and the Personal Data Protection Department (JPDP) to investigate the incident.

Fast forward to a few hours later, Maybank has since published a statement regarding it through Twitter at 4:51 PM which we have reproduced in full below:

We take allegations of customer data leak very seriously and are investigating if these allegations are true since Maybank has not experienced a data breach.

Rest assured that we place strong cybersecurity measures to safeguard the integrity and privacy of all our data.

Astro followed suit 15 minutes later by putting up this statement on Twitter as well:

The security of our customers’ confidential information is of primary importance to us and we believe we have taken the necessary security measures to protect the data of our customers. Our investigations are ongoing, and we will advise if there is more to report.

While the words might be different, the message seemed rather similar. In general, both companies have denied that their databases have been leaked out and investigations are already in place.

It remained to be seen how long these internal investigations would last as well as their actual outcome. Furthermore, both companies still need to face the federal authorities in regard to the incident, so we don’t think this will be the last time we heard from them.