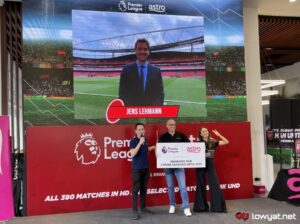 Astro today announced that the company has secured exclusive broadcast rights for English Premier League (EPL) in Malaysia once again. Just like the previous renewal that took place in 2018, the licence will last for three seasons.

Hence, this means that EPL will continue to be broadcast by Astro in Malaysia until the 2024/2025 season. The announcement came just as the satellite broadcast company is offering 60 days of free access to new Sports Pack customers.

In general, the Astro Sports Pack is a combination of the company’s base package and sports content. Known as Primary Pack, the base package itself provides 85 channels while the sports contents are delivered through 10 channels that include five Astro SuperSport channels, three channels by bEIN Sports, SPOTV, and Eurosport HD.

The Sports Pack also comes with access to the Astro GO app and 4K contents via Astro UHD channel 780. As for the pricing, the pack is currently going for RM 89.99 per month.

The post Astro Secures English Premier League Rights Once Again; Up Until 2025 appeared first on Lowyat.NET.