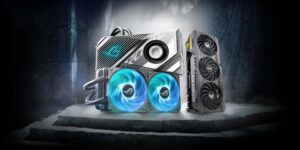 ASUS officially launched its custom cooled GeForce RTX 3090 Ti graphics cards and like other GeForce RTX 30 series cards before it, the new NVIDIA BFGPU are available in both TUF Gaming and ROG Strix variations. More specifically, the latter of the two lineups offers a water-cooled solution, instead of the traditional air-cooled design.

Starting with the TUF Gaming series, this version of the RTX 3090 Ti is available in two SKUs: a standard version and an OC Edition. As with all TUF Gaming series cards, consumers will receive the same militaristic looking, black metallic cooler shroud, complete with all the stylised cuts and angles. On top of that, there is also a massive 3.2-slot heatink attached on the GPU, befitting of its performance largesse and size.

To keep it cool, the TUF Gaming RTX 3090 Ti employs a triple-fan solution that has the middle fan spinning clockwise and the other two counter-clockwise, in order to reduce turbulence while also increasing static pressure.

Last but not least is the ROG Strix LC GeForce RTX 3090 Ti. As the LC in its name suggests, this version of the card features AIO watercooling and to that end, the GPU is attached to a 240mm radiator at one end, which is then cooled by dual 120mm fans that also support ASUS’ Aura Sync ARGB LED technology. Having said that, the main PCB also has a single blower-style fan installed on the card’s shroud, which keeps the VRM modules and other components on it cool.

Further, the card also features a dual-mode BIOS, allowing users to switch between higher cooling performance and clocks, or to a quieter and more power-efficient profile. Lastly, the card also supports 0dB technology, which stops the fan from spinning when the card is idle or running light loads.