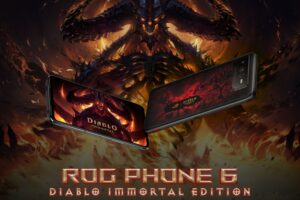 Besides the fact that it is a family of gaming phones, one element that defines the ASUS ROG Phone 6 series is its visual identity. More specifically, its its many shapes and lines that give it its futuristic look. Even the limited Batman Edition keeps this aesthetic alongside the Dark Knight coat of paint. But another limited edition of the phone looks to forgo said futuristic lines in favour of a more traditional look. This is the ASUS ROG Phone 6 Diablo Immortal Edition.

Limited edition flourishes aside, it is pretty much similar to the many variants of the phone that came before it. It has the same 6.78-inch Full HD+ screen with 165Hz refresh rate, the same 6000mAh battery, the same 50MP + 13MP + 5MP rear camera setup and the same 12MP front-facing shooter. For its number crunching components, the ASUS ROG Phone 6 Diablo Immortal Edition runs a Qualcomm Snapdragon 8 Plus Gen1 chipset, with 16GB of RAM and 512GB of storage space. This makes it a sort of in-between of the Pro and Ultimate models.

But as mentioned, it’s what’s on the outside that sets this version apart from the rest. Instead of the usual black, grey or white with futuristic lines, you instead get a Hellfire Red colourway with theme-appropriate prints on the back. But probably a downgrade for some is the lack of the ROG Fearless Eye RGB dot matrix at the back – or the ROG Vision screen on the Pro model. Instead, the ASUS ROG Phone 6 Diablo Immortal Edition comes with a light up RGB LED for the tie-in game’s logo.

For what it’s worth, you get a lot of exclusive accessories to go with your special edition phone. Beyond just a Diablo Immortal theme you get with the phone, you also get phone cases, a map of Sanctuary, and a themed SIM ejector tool. There’s even a UV torchlight called Fahir’s Light that you can shine on both the case and map to reveal extra details.

It all sounds very fancy, but not really things that you’ll use with any frequency with the phone itself. And while ASUS Malaysia has announced the ROG Phone 6 Diablo Immortal Edition, the company says that local pricing and availability details are still to be confirmed.