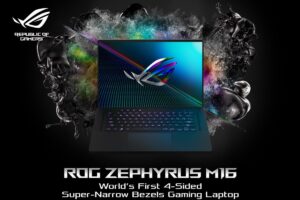 Besides its refreshed TUF Gaming 2022 series of laptops, ASUS Malaysia also announced the launch window for its new and refreshed ROG Zephyrus M16. As a follow-up to last year’s M16, the latest model retains much of the same design, but with some changes to the hardware, of course.

One of the more important changes to the M16 is its display. While it still retains the same 16-inch panel size, this year’s model now uses ASUS’s ROG Nebula DIsplay technology. Beyond that it also maintains the same 16:10 aspect ratio, and WQXGA (2560 x 1600) resolution, as well as the same 165Hz refresh rate and 3ms response time. Design wide, the laptop also retains the same slim 15-inch chassis as its predecessor and, to an extent, several ROG Zephyrus models.

Beneath the hood, the new M16 houses the top of the line Intel 12th generation Core i9-12900H CPU. Specifications-wise, the CPU sports a 14-cores (six P-Cores, eight E-Cores), 20-threads configuration, and has a base and boost clock of 2.4GHz and 5GHz. As for its GPU, the laptop will have a choice between an NVIDIA GeForce RTX 3060, an RTX 3070 Ti, or an RTX 3080 Ti. All of which have a TGP of 120W and access to MUX Switch and NVIDIA’s Optimus technology.

Additional specifications for the M16 include up to 32GB of DDR5-4800MHz RAM running in dual-channel mode, up to 2TB of PCIe Gen4 storage with one additional vacant M.2 SSD slot, should you wish to expand the storage independently. Oh, and like the majority of current generation laptops, the M16 also supports the latest Wi-Fi 6E standard. Moving on, keeping the laptop running is a large 90WHr 4-cell battery.