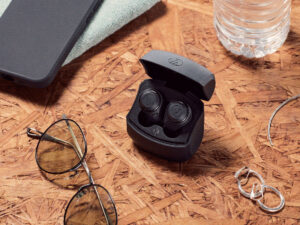 The company says that the earbuds can last up to 20 hours of continuous usage on a single charge with ANC turned off or 15 hours with ANC on. Combined with the charging case, users can get a total of 50 hours of playback, with an additional 90 minutes from just 10 minutes of charging.

The wireless earphones are equipped with a low-latency mode that should reduce the audio lag when watching movies or playing games. There’s also the “quick hear-through” feature that lowers the playback volume and enhances sounds from your surroundings, which sounds a lot like a transparency mode.

Moreover, the earbuds support Fast Pair, multipoint Bluetooth pairing, and have Qualcomm cVc 8.0 for noise cancellation during calls. Each side has a physical tactile button, with the right earbud controlling playback while the left earbud controls volume and cycles through noise-cancelling functions.

The Audio-Technica ATH-CKS50TW are now available in the UK and Europe for £149.99 (~RM854) and 169 Euros (~RM804) respectively, while they are also listed for 218 SGD (~RM680) in Singapore. The company has not announced pricing or availability for Malaysia.