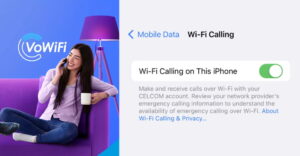 Apple earlier today rolled out iOS 15.6 update to iPhone users all over the world. In general, it is a rather minor update that focuses on security patches as well as fixes for device storage alongside several apps but for those who are on Celcom, there is an additional reason for them to update their iPhones immediately.

As it turns out, the iOS 15.6 update has also enabled the Voice Over Wi-Fi (VoWiFi) feature for Celcom’s iPhone users. Based on the screenshots provided to Lowyat.NET by Twitter user @tcp_asdf, the update seems to also carrier settings version 50.0.1 for Celcom users.

This is despite the fact that the feature has not been listed under the telco’s name on Apple’s website at the time this story is published. Similarly, Celcom’s website has not yet included iPhone in their VoWiFi device list.

However, the telco has confirmed the availability of VoWiFi for iPhone with iOS 15.6 inside its FAQ. If you are not sure how to obtain the update, all you got to do is go to Settings >> General >> Software Update and follow the on-screen instructions.

Once the update has been applied to your iPhone, you should be able to see the Wi-Fi Calling option appear inside Settings >> Mobile Data. From there, just toggle the “Wi-Fi Calling on This iPhone” option to turn it on.

Enabling the VoWiFi feature would allow you to make and receive a phone call even though you are facing bad cellular coverage. Of course, do note that you need to have an iPhone 6s or newer in order to obtain the iOS 15.6 update.

Believe it or not, Celcom only just deployed VoWiFi last month as opposed to other telcos in Malaysia such as U Mobile which provided it to their customers in 2016. Digi then followed suit in 2017 while it took several years before Maxis enabled the feature in late 2021.