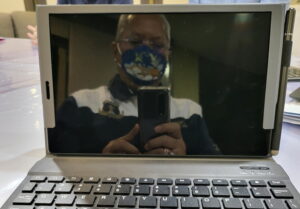 Minister of Communications and Multimedia, Annuar Musa last month has revealed that the online registration system, for the PerantiSiswa Keluaraga Malaysia initiative, is expected to be completed by the middle of April. The minister reiterates this once again on Twitter yesterday although this time around, the tweet also features a number of photos that depict an unknown tablet.

Even though Annuar noted in the same tweet that those are just decorative images even, it is not hard to wonder whether it is the very tablet that will be distributed through the PerantiSiswa programme. For starters, one of the images clearly showed that he was indeed the one who capture these images.

Additionally, the tablet in the picture features a folio-style keyboard and stylus which is in line with the requirements that Annuar has announced last month. If you may recall, other requirements that the tablets need to fulfil are a 10.1-inch display and 4GB of RAM although the exact model and brand name of the tablet in these pictures is not known as the minister did not share any images of its back area.

Given the buttons and status lights on the top right section of the keyboard, it is probably a Bluetooth keyboard. At the same time, the stylus that is attached to the tablet seems to be a generic passive stylus.

With a budget of RM450 million, PerantiSiswa was originally meant to provide tablets to 600,000 students of higher learning institutions that came from B40 families according to the announcement made by Finance Minister Tengku Zafrul last year. However, the number was somehow trimmed down to 400,000 students in a follow-up announcement by Annuar last month.

The post Comms Minister May Have Shown Off PerantiSiswa Tablets Ahead Of Program’s Launch appeared first on Lowyat.NET.