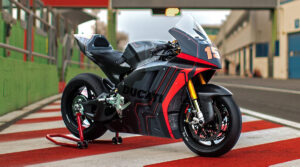 Ducati recently has unveiled its first ever electric motorcycle prototype, the V21L. Though not designed for commercial use, the new bike is set to become the key piece in the 2023 season of the FIM MotoE World Cup racing, where the company is also appointed as the competition’s official and sole supplier of the e-motorcycles used.

The Ducati V21L is produced as part of a collaboration between the company’s research and development department and its racing department, Ducati Corse. Panigale enthusiasts will immediately recognise the electric motorcycle’s design, which mainly features a carbon fibre exterior along with aluminium parts.

Ducati says the e-motorcycle weighs in at 225 kilograms, with the battery claiming under half of its overall weight. This is noticeably heavier than ICE models used for the competition, but it is still around 11 kgs under the MotoE specification for the 2023 season. That being said, the V21L is still 35kg lighter than the current e-motorcycle used for the competition, the Energica Ego.

Featured onboard is a 110 kW motor that is capable of producing 150 horsepower and 140 Nm of torque. Meanwhile, the Ducati V21L also comes with an Ohlins NPX 25/30 43mm suspension with USD pressurised fork and TTX36 rear shock, Ohlins steering damper, as well as Brembo braking system which consists of double steel 338.5mm discs in front and a single 220mm disc at the rear. Performance-wise, the e-motorcycle is reported to have achieved speeds of up to 171 MPH at the Mugello MotoGP Circuit in Tuscany.

Paired together with its motor is a 18 kWh battery, which is claimed to be enough for allowing the bike to complete the required seven laps of key Grand Prix tracks. Ducati adds that the V21L does not need to cool down before charging, thanks to its built-in cooling system. And on that note, it is said that a 45-minute charge is able to top-up 80% of its battery.

Although Ducati’s first ever e-motorcycle is designed mainly for track use, the company did not discount the possibility of creating all-electric motorcycles for the consumer market. “At this moment, the most important challenges in this field remain those related to the size, weight, autonomy of the batteries and the availability of the charging networks,” said Ducati R&D director Vincenzo De Silva in a statement. “Helping the company’s internal expertise to grow is already essential today to be ready when the time comes to put the first street electric Ducati into production.”