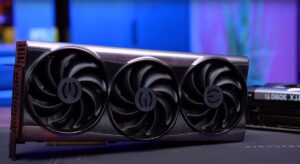 It seems that EVGA actually had a GeForce RTX 4090 in the pipeline, primarily in the form of its popular FTW3 lineup. The GPU, which is effectively a permanent prototype, essentially gives us a glimpse of what could’ve been, had the brand not decidedly up and leave the GPU market.

The RTX 4090 FTW3 card was showcased on the channel of TechTuber JayzTwoCents, who claims that EVGA had delivered the prototype card to him directly, and it is beyond a shadow of a doubt, one massive piece of hardware. For that matter, it also gives us an idea of what the brand would have released, had it not decided to abruptly exit the market.

As a quick recap for those of you who have been living under a rock: approximately two months ago, EVGA announced suddenly that it was leaving the graphics card market after more than 20 years in the market, and that NVIDIA was to blame for its decision. Elaborating further, the brand accused Team Green for being a “bad partner” and while it did not provide specifics, speculations have pointed fingers at NVIDIA not doing its due diligence in relevant matters. Including providing the necessary information to the former AIB partners, including MSRP, the cost to buy its chips, as well as withholding critical information until the 11th hour.

Getting back to the RTX 4090 FTW3, the GPU features noticeably larger fans than the coolers used on its predecessors and, at a glance, appears to have more blades on it, suggesting higher static pressure. Based on the JayzTwoCents’ product shot of the card in the case, the card takes up four slots in a casing, which again is par for the course for a flagship-tier graphics card such as this.

Other little details show that the 16-pin PCIe Gen5 power port of EVGA’s RTX 4090 FTW3 was repositioned to the very front of the card, instead of having it installed into the spine, as virtually all NVIDIA’s AIB partners do with their own iteration of GPUs. Aesthetically, this would allow DIY PC enthusiasts and builders who favour a clean look inside their casing to ensure that the card would look more visually pleasing.

For another matter, EVGA’s RTX 4090 FTW3 is also functional, albeit only through a “homemade” vBIOS, but the GDDR6X memory on the GPU was capable of hitting a 1900MHz positive offset. To that end, JayzTwoCents points out that the power limit on the card was locked, otherwise, he would’ve gone to town on it and overclocked it to achieve some otherworldly scores.