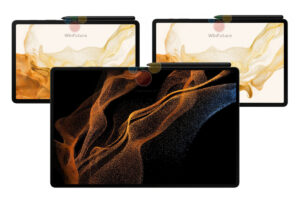 Details of the allegedly upcoming next-gen Samsung Galaxy Tab S8 series has made its way online, thanks to a comprehensive leak published by WinFuture. The new details also mostly corroborates with previous leaks shared prior to this, especially those provided by reliable tech insider Steve Hemmestoffer (aka OnLeaks), but with some minor (if not, updated) details.

On that note, it is again suggested that the upcoming Samsung tablet series will introduce a new Ultra variant, which is also the only model to feature a notched Super AMOLED display for its two front-facing 12MP cameras. The screen will be a massive 14.6-inches in size, featuring a resolution of 2960 x 1848 pixels, 120Hz refresh rate, and a maximum brightness of 420 nits.

Following that is the Plus version of the tablet, which is said to be equipped with a 12.7-inch Super AMOLED display with 120Hz refresh rate and a slightly lower resolution of 2800 x 1752 pixels. The third model, which is the standard Galaxy Tab S8, is suggested to feature an 11-inch LTPS LCD screen, again with 120Hz refresh rate but its resolution size is unknown at this time.

All three tablets are said to feature Qualcomm’s Snapdragon 8 Gen 1 flagship chipset, Gorilla Glass 5 display protection, S Pen support (with magnetic mounting points), under-display fingerprint sensors, quad speakers with Dolby Atmos, as well as Android 12 via Samsung One UI 4.1. The standard model will have 8GB of RAM and 128GB of storage, whereas the Plus version will also have 8GB RAM but with an internal storage capacity of up to 256GB. The Ultra, on the other hand, is said to come with up to 16GB RAM and up to 512GB of storage. Expectedly, the trio will also arrive with microSD support for expanded storage.

Besides that, all three models are said to be equipped with dual cameras on their backs, consisting of a 13MP main shooter and a 6MP ultra-wide. Battery-wise, the Ultra will feature an equally large 11,200mAh capacity, while the Plus and standard variants come with a 10,090mAh and 8,000mAh respectively.  The three will rely on USB-C for fast charging, although the supported speed was not specified by WinFuture.

As for pricing, a separate leak by website Appuals suggests that the standard Galaxy Tab S8 may top out at around EUR850 (~RM4,062), while the Plus and Ultra variants may be priced at EUR1110 (~RM5,304) and EUR1220 (~RM5,830) respectively for their highest configurations. It is still not known when Samsung plans to debut all three of its next generation tablets.