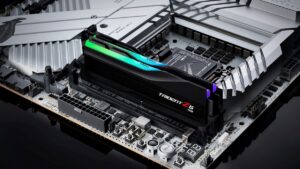 G.Skill, the brand known for its memory sticks for desktop PCs and laptops, have officially launched its new lightning-fast DDR5-8000 RAM Trident Z5 RGB kits. With its launch, the company can now lay claim to having the fastest memory kits on the market, at least until it, or another memory maker, comes along to steal the title.

Specifically, the new Trident Z5 RGB memory kits are 32GB kits, comprising two sticks of 16GB, validated to run at 8000MT/s, or in this case 4000MHz. They are also available in two colours: Black and white. Regardless of the heatsinks and their colours, both models have moderately decent latency timing at 38-48-48-128, but require 1.45V to actually hit G.Skill’s proclaimed DDR5-8000 frequency.

However, if you intend to just run the Trident Z5 RGB kit at the default JEDEC speeds of 4800MT/s, then the voltage can be dropped to just 1.10V. That being said, it is unlikely that the majority of consumers who purchase this DDR5-8000 memory kit will be doing that, considering how much it’ll set them back.

Speaking about pricing, you’re probably aware that this Trident Z5 RGB DDR5-8000 memory kit isn’t going to come cheap, and you’re very obviously and absolutely right. Now, we should mention that there is a price discrepancy of US$5 (~RM21) between the black and white themes, but on average, both memory kits costs US$530 (~RM2330) on average, which is really expensive.

On another note, the Trident Z5 RGB DDR5-8000 memory kit may not be too kind for consumers that are running a desktop PC based on AMD’s AM5 platform, given that these kits were designed primarily to work with Intel’s 13th generation Raptor Lake platform. Simply put, the kits support Intel’s XMP 3.0 memory profile and there are currently no versions that support AMD’s EXPO technology.

At the time of writing, G.Skill did not provide local pricing for the Trident Z5 RGB DDR5-8000.

The post G.Skill DDR5-8000 Trident Z5 RGB Memory Goes At A Starting Price Of US$530 appeared first on Lowyat.NET.