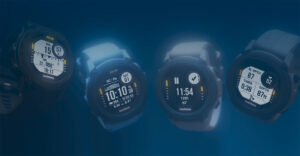 Garmin Malaysia recently launched its diving-centric Descent G1 smartwatch series, which consists of a standard variant and one that relies solely on solar charging. Both watches feature durable bodies with a depth resistance of 10 ATM (100 metres), tested to engineering standards for dive compliance.

The Garmin Descent G1 series is offered in a single 45mm size, equipped with a 0.9-inch mono display with a resolution of 176 x 176 pixels. The duo”s rugged dive-ready bodies also feature leak proof inductive buttons and sapphire lens to complement its underwater survivability. The standard model is available in either Storm Grey or Powder Grey colour options, whereas the Solar variant is offered in either Black or Hurricane Blue. Both watches use Garmin’s 2mm QuickFit bands.

On top of featuring regular smartwatch functions and the brand’s extensive list of workout and health oriented features (V02 Max, Fitness Age, heart rate tracking, etc), both devices also come with innovative dive technologies such as a 3-axis underwater dive compass for detailed and safer dives. According to Garmin, divers can view depth, dive time, temperature, NDL/TTS, ascent/descent rates, gas mix, P02, N2 loading, and decompression/safety stop information – all of which are customisable to their preference.

Besides that, the watches are able to mark surface entry and exit points via GNSS satellite support, and log details of the user’s diving activity to the Garmin Dive companion app. In addition, they can also be paired with an inReach Mini satellite communicator to send and receive messages, as well as trigger an interactive SOS in case of emergency.

In terms of battery life, Garmin says the standard Descent G1 variant is able to last up to 25 hours in dive mode and up to three weeks in smartwatch mode. The solar version, on the other hand, performs similarly to its sibling in dive mode but lasts up to a whopping four months in smartwatch mode, or even longer if it receives a sufficient amount of daily sunlight.

The Descent G1 and Descent G1 Solar are available now at suggested retail prices of RM 2,570 and RM 3,030 respectively. Those interested may purchase the newly launched smartwatches via Garmin’s official store, its online stores on Lazada and Shopee, AECO e-store, and all authorised retailers nationwide.