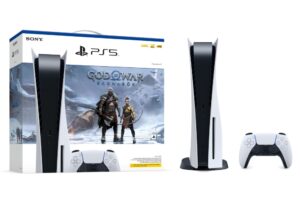 God of War Ragnarok is launching on 9 November, with a fashion tie in and a special edition DualSense controller in tow. But for most who hope to play the game, a PS5 console would mean a lot more than any of those. The good news, kind of, is that Sony Interactive Entertainment has announced bundles for the console and game.

Since there are physical and digital versions of the console, you can expect two bundles for each PS5 edition. Despite the bundle you choose, your copy of God of War Ragnarok will come in the form of a voucher card with a code to redeem it.

Beyond that, other items in the bundle are everything else you need to make use of the console, from the power and HDMI cables to the base and DualSense controller. Both the console and controller come in their default white colours. So you’ll still need to purchase the special edition controller mentioned earlier if you want to really show your love for the series. You can also take things a step further and get a physical Collector’s or Jotnar Editions, assuming there are any left.

As for their prices, the the digital edition of the PS5 God of War Ragnarok bundle comes in at RM2339. This is naturally taking into account the price of the game and the recent price hike that the console itself suffered. The physical edition of the bundle is instead priced at RM2769. Both will be available on the day the game itself launches, which is 9 November.

SIE says that these will be available at authorised dealers and retailers, in addition to Sony Store outlets. Hopefully the scalpers’ inventories are already bloated enough that ordinary gamers can get their hands on these. After all, beyond being in a bundle, the console and controller are of the standard editions.