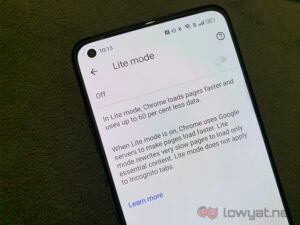 Google has revealed its plan to remove the Lite Mode from the Google Chrome browser app. This will be done through Chrome M100 which is scheduled for release on 29 March.

The Lite Mode was originally launched as Chrome Data Saver back in 2014, which allowed users to load web pages faster while reducing the usage of mobile data. This was done through data compression which was performed by Google’s servers before the data made its way to users.

The company justifies its decision by saying that the cost of mobile data has decreased in many countries over the years especially since unlimited data plans are now quite common and affordable. This means users these days have less of a reason to use Lite Mode.

Furthermore, Google also says that it’s already made improvements with the app to further minimise data usage in general. Meanwhile, do note that Chrome 100 is expected to cause bugs on certain websites, though developers are expected to have already prepared solutions when the time comes. The Chrome team is also working to allow users to manually save passwords in future versions of Chrome.

The post Google Chrome Lite Mode To Be Discontinued In March appeared first on Lowyat.NET.