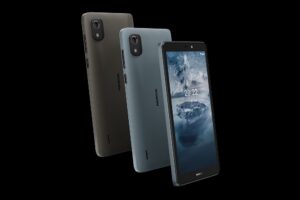 With HMD Global handling the Nokia name, the brand these days is more focused on making entry level and midrange phones than flagships. As part of MWC 2022, the brand has announced three more devices to add to its existing catalogue of devices. One of them even has two battery configuration options.

Starting off, there’s the Nokia C2 2nd Edition. The name implies that it’s an updated version of the original which was released back in 2020. But it’s not all upgrades all around. To start. the Full HD screen still measures 5.7 inches across. Built in storage space has gone up from 16GB to 32GB, and there’s now a 2GB RAM option in addition to the original 1GB.

But the battery capacity has gone from 2800 mAh to 2400mAh. Ditto the front facing camera, going from 5MP to 2MP. The rear camera is maintained at 5MP though.

Moving on to the new Nokia C21, we’re looking at a 6.5-inch Full HD+ screen, a 3000mAh battery, RAM options of 2GB or 3GB, and a choice of either 32GB of 64GB for storage. For cameras, it runs an 8MP rear shooter and a 5MP front-facing camera. This, as well as its Plus model, also come with a fingerprint sensor at the back.

The Nokia C21 Plus is probably the most interesting one of the three. It has the same 6.5-inch Full HD+ display of the base model, the same storage capacity options, and additional 4GB RAM option. Where it gets interesting is that you also have a choice between a 4000mAh or 5050mAh battery to go with it. Cameras are a 13MP main shooter with a 5MP secondary one in front.

All three phones run an unspecified UNISOC processor paired with Android 11 Go, and can support storage expansions of up to 256GB via microSD. The Nokia C2 2nd Edition is priced at EUR79 (~RM371), while the C21 has a price tag of EUR99 (~RM464). The Plus model, on the other hand, costs EUR119 (~RM558). TechRadar reports that the C2 2nd Edition and C21 Plus will launch in the UK in April, but no word on when it will be available elsewhere, including on our shores, just yet.