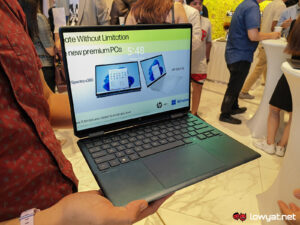 Alongside the Envy 16, HP is introducing another powerful machine to the Malaysian market – the HP Spectre x360. The laptop retains the beloved 360-degree foldable form factor that we’ve seen in previous models as well as the latest chipset from Intel.

The 2-in-1 convertible sports a 13.5-inch touchscreen display with a tall 3:2 aspect ratio that comes in two variations. Customers can choose between one with a 1920×1280 IPS display or a 3000×2000 OLED display, with the former boasting a peak brightness of 1000 nits while the latter only has a peak brightness of 500 nits.

The updated Spectre x360 runs on the 12th Gen Intel Core i7-1255U and Intel Iris Xe graphics with 16GB of RAM and 1TB of SSD storage. As for the ports, it is equipped with two Thunderbolt 4 ports, a single USB 3.2 Type-A port, a 3.5mm audio jack, and a microSD card reader. Additionally, it features Wi-Fi 6E support, Bluetooth 5.2, and a fingerprint reader.

On board the Spectre x360 is a 5MP webcam with an infrared sensor, which HP calls the GlamCam as it has enhanced video calling features such as noise reduction, appearance filter, auto framing, and more, complete with a physical camera shutter for privacy. It also has a quad-speaker setup tuned by Bang & Olufsen.

The convertible laptop is powered by a 66Wh batter which can last up to 15 hours on video playback. With the included 65W power adapter, HP claims that the Spectre x360 can charge from 0 to 50% in 45 minutes.

The HP Spectre x360 is available for purchase in HP Experience stores, HP’s online store, and authorised resellers. The base model with an IPS display costs RM7,199 while the higher-end model with an OLED panel is priced at RM7,599. For a limited time, customers who purchase the new Spectre x360 and Envy 16 can get freebies worth up to RM1,500, including a monitor, mouse, bluetooth headset, and accidental damage protection.