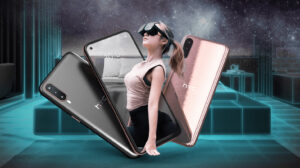 Just in case you’ve forgotten, HTC is still making smartphones. In fact, the Taiwanese tech company has recently unveiled its latest handset, the HTC Desire 22 Pro, which is touted to offer compatibility with its Flow VR headset and Viverse ecosystem.

While that may sound like incredible feats worthy of a flagship-class smartphone, the device itself is actually a mid-ranger – more on that later. And besides its VR and “metaverse” compatibility, the Desire 22 Pro also comes with built-in tools that allows you to directly manage digital assets like cryptocurrencies and NFTs. Whether this is actually a good or bad thing, we’ll leave it to you to decide.

As mentioned earlier, it is actually a mid-range smartphone, considering its hardware specifications. On that note, it is equipped with a 5G-enabled Snapdragon 695 chipset, which is paired together with 8GB RAM and 128GB of internal storage. HTC says the latter can also be further expanded up to 1TB via a microSD card. Besides that, the Desire 22 Pro comes with NFC, WiFi and Bluetooth 5.1 connectivity, as well as Android 12 out of the box.

Powering the device is a 4,520 mAh battery capacity, which is considerably less than what is usually offered for phones within the mid-range tier. Nevertheless, it does feature wired and wireless fast charging support at 18W and 15W respectively. Meanwhile, colour options for the phone include rose gold and black.

The HTC Desire 22 Pro is slated to go on sale in Taiwan and Europe on 1 July and 1 August 2022 respectively. As for pricing, the new smartphone will retail at TWD 11,990 (~RM 1,776) for the former, and EUR 459 (~RM 2,137) for the latter. The company did not reveal whether it will be released in other markets outside of the two regions at this time.