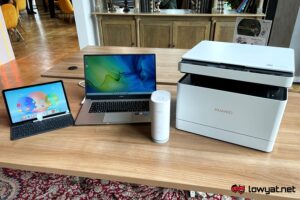 Huawei earlier this week has officially launched several new devices for the Malaysian market and while they are still generally targeted at consumers, the intended environment is rather different than usual. Instead of Huawei’s common use cases such as photography, these devices are meant for offices and productivity.

The most “unusual” device on the list is the PixLab X1 multi-function laser printer (MFLP). Yes, you’ve read that right: Huawei now has its own printer which the company claimed is running on HarmonyOS 2 just like its smartphones, tablets, and smart TVs.

According to the specs sheet, the P1 is able to churn out 28 pages per minute and the company also claimed that it takes as quick as under 8.5 seconds for the printer to produce the first page. The X1 default resolution is 600 x 600 DPI although it can go up to 1200 x 600 DPI.

One of the printer’s main highlights is its drawer-style toner cartridge which made the replacement process rather convenient and it also has a page yield of up to 1,500 pages. As for X1’s drum unit, Huawei rated its lifetime as 15,000 pages.

Alongside the support for Wi-Fi, Ethernet, and USB, the printer has also been equipped with NFC that allows users to print directly from their Huawei phones although do note that the X1 is a monochrome printer. Being an MFLP, it can also be utilized as a copier and scanner.

Other devices that Huawei has launched as part of its initial Smart Office lineup in Malaysia are more common than the PixLab P1 though, as far as Huawei devices are concerned. Among them is 2022 MatePad 10.4 which runs on a Kirin 710A processor – a rather odd choice since it is slower than the Kirin 820 that was equipped into last year’s model.

The 2022 model still features the same 10.4-inch IPS display with 2000 x 1200 resolution, 4GB of RAM, 128GB internal storage, LTE capability, 8MP front camera, Harman Kardon speakers, and 7250mAh speakers. Aside from the processor, the other known change for this year’s MatePad 10.4 is the larger resolution 13MP rear camera at 13MP and the support for the second-generation M-Pencil stylus.

The third device in the list is the WiFi Mesh 3 which is essentially an AX3000 Wi-Fi 6 mesh router that also has built-in NFC capability which allows fact connectivity for NFC-enabled Android phones. It is able to provide a theoretical maximum speed of 574Mbps on 2.4Ghz and 2402Mbps for 5GHz frequency.

Huawei claimed that a WiFi Mesh 3 is able to cover an area of 200 square meters and can support more than 250 devices. Users can also manage their Wi-Fi network via the Huawei AI Life app that can even provide users visualization of their Wi-Fi network’s signal coverage.

Out of the three devices, only MatePad 10.4 has actual availability and pricing information as further details regarding WiFi Mesh 3 will only be announced next month while PixLab X1 will follow suit in June. The MatePad 10.4 will be available for pre-order from 22 April to 2 May for RM1,599 in which pre-order customers will be provided with a second-generation Huawei M-Pencil and Huawei Smart Keyboard without additional cost.

At the launch, Huawei also revealed the new pricing for the MateBook D15 with Intel Core i5-1135G7 which the company introduced in Malaysia last year. Originally priced at RM3,699, the variant with 8GB of RAM will be available for RM3,099 from 22 April onwards while the unit with 16GB RAM can be obtained on the same day for RM3,399 instead of its original launch price of RM3,899.

Those who opted for the 16GB variant will be provided with a Huawei FreeLace wireless headset, Huawei Backpack, and Huawei Bluetooth Mouse. For the 8GB variant, customers will only receive a Huawei Backpack as a freebie.