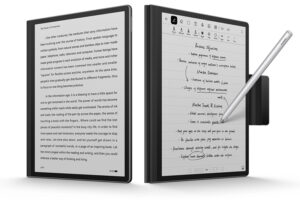 Huawei has expanded its tablet family by unveiling the MatePad Paper. However, the new model is quite different when compared to previous MatePad models as the MatePad Paper is an E-Ink tablet.

In addition to that, the MatePad Paper is not exactly a full-fledge tablet even though it runs on HarmonyOS as per recent MatePad models. While the tablet does have access to Huawei AppGallery but it is only able to support certain apps.

So, what exactly the MatePad Paper is designed for? Well, note-taking and drawing are definitely some of the tasks that it can tackle given the fact that the tablet supports the second-generation Huawei M-Pencil stylus. The stylus can be magnetically mounted on one of its sides which would charge it at the same time.

In addition to having split-screen multitasking capability, the E-Ink tablet also supports voice recording while taking notes and is able to convert handwritten notes to text.  Other than that, it seemed that Huawei is also aiming the MatePad Paper to e-book lovers that are looking for ample screen space to read their e-books.

Equipped with a 10.3-inch display that is able to produce 256 shades of greyscale, it also has a smart refresh rate that changes depending on the content, which apparently allows the tablet to even display GIFs and videos more smoothly – though they’ll still be in black and white. To further entice e-book enthusiasts, the E-Ink display of the tablet has an adjustable backlight with 32 levels of brightness to cater for nighttime reading.

Huawei claims that the MatePad Paper boasts an impressive standby time of 28 days or six days of reading before needing a recharge, with 22.5W charging that gives it eight hours of reading time from 10 minutes of charging. The tablet comes with 4GB of RAM, 64GB of storage, a fingerprint scanner that doubles as a power button on the top, stereo speakers, Wi-Fi 6, Bluetooth 5.2, and a book spine design on one side that should make it easier to hold.

The Huawei MatePad Paper will be available in black, khaki, and blue together with a retail price of EUR499 (~RM2,342) in Europe which made it more expensive than an iPad mini in Malaysia (RM2,299) although the E-Ink tablet does come with the second-generation Huawei M-Pencil and a Folio Cover as standard. At this time, it’s unknown if it will be made available in other markets.