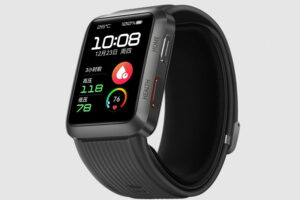 Alongside the foldable P50 Pocket, Huawei has also launched a new fitness called the Huawei Watch D. It is not only the company’s first-ever wearable with ECG feature but the new model also comes with blood pressure monitoring capability and has been registered as a Class II medical device in China.

To perform this particular feature, the company has implemented a micro air pump and airbag into the wrist strap of the Watch D. Collectively known as the Huawei TruBP technology, they worked together with a high-precision sensor, pressure feedback control circuit, and low flow resistance gas path.

As for the ECG feature, Huawei claims that the ECG measurement and data collection, which uses eight circular photoelectric sensors, can detect risks of atherosclerosis, arrhythmia, and sleep apnea. Users will be able to quickly get online consultation from experts to better understand the collected health data.

Watch D is also able to keep track of blood oxygen (SpO2) levels as well as sleep, stress, and body temperature. Apart from that, the IP68-rated wearable also has a built-in GPS and NFC for contactless payments.

Equipped with a 1.64-inch 456×280 AMOLED display that is housed in an aluminium casing, the Watch D also has more than 70 sports modes. While the size of the battery hasn’t been revealed, Huawei says it is able to last up to seven days.

The Huawei Watch D is priced at CNY2,988 (~RM1,972) and will go on sale in China starting December 25 with two colour options — Black and Titanium. There’s no word on whether it will be coming to other markets.