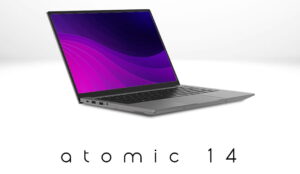 Back in August, Illegar expanded its productivity laptop line-up by introducing the Atomic 16. Now, the company has added another option called Atomic 14 which as you may be able to guess from its name, is a much more compact offering.

At a glance, it is really their screen sizes that set these two Illegear Atomic models apart. In place of the 16-inch screen, the new laptop has been equipped with a 14-inch IPS display even though the laptop still has a similar design language and was even built using the same magnalium material for its chassis.

Similar to its 16-inch counterpart, the laptop has a 16:10 aspect ratio and a native resolution of 2560 x 1600 alongside 100% sRGB colour gamut coverage and a 120Hz refresh rate. Interestingly, its maximum brightness level is much higher at 500 nits than Atomic 16 which was rated at 350 nits.

As for its processor, Illegear has retained the Intel Core i7-12700H as one of the options for Atomic 14. The second option is slightly different though in the form of the Intel Core i5-12450H which runs at a lower speed and has less amount of processing cores & threads as compared to the Core i5-12500H that was offered for Atomic 16.

In terms of I/O port, the USB port setup for the Atomic 14 is slightly different than Atomic 16 as the second USB Type-C port on the 14-inch model is a Thunderbolt 4 port which was made available for its 16-inch counterpart. On the other hand, the Atomic 14 is missing the third USB Type-A 3.1 Gen 1 port.

Headphone and microphone combo port remain standard on the Atomic 14 as well as a white backlit silent keyboard, a pair of 1.5W speakers, dual digital microphone, and HDMI 1.4 port. The laptop also comes with a physical switch for its webcam which is yet another feature that was not available on Atomic 16.

Given its smaller footprint, it is not surprising to see that the Atomic 14 has a smaller 55Wh battery than Atomic 16 which has a capacity of 70Wh. However, Illegear did not specify the exact battery life rating for the laptop though aside from claiming that it is “long-lasting”.

Available for pre-order right away through Illegear’s official website, the base model for Atomic 14 which features Core i5-12450H, 4GB DDR5 RAM, and 512GB NVMe solid state drive costs RM3,199. With an estimated delivery date sometime in January 2023, pre-order customers will be provided with a free upgrade to 8GB DDR5 RAM and Thermal Grizzly Kryonaut implementation as well as up to three free games from the Intel Gamer Days bundle.