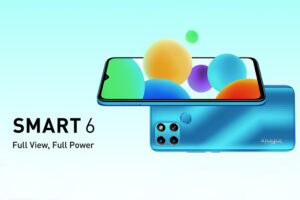 Infinix is launching a new entry-level smartphone called the Smart 6 at an affordable price of only RM369. The phone runs on XOS 7.6 based on Android 11 Go Edition and boasts a long-lasting battery life.

First off, it has a 6.6-inch 720p IPS display with a teardrop notch for the front camera. The Smart 6 runs on the Unisoc SC9863A chip with only 32GB of storage and 2GB of RAM but has a microSD slot for storage expansion up to 512GB.

The phone is powered by a large 5,000mAh battery which Infinix claims to provide up to 23 hours of video playback. The company didn’t provide the charging speed and it charges via a microUSB cable at the bottom, where there is also a single speaker.

On the back, you’ll find an 8MP camera, a 0.8MP depth sensor, and dual-LED flashes while the front houses a 5MP selfie camera. There’s also a rear fingerprint sensor as well as facial unlock using the front camera.

The Infinix Smart 6 goes on sale starting 4 April on Infinix’s Shopee and Lazada pages and for a limited time, it will be offered at an even lower price of RM329. It comes in Purple, Ocean Blue, Light Sea Green, and Polar Black.

The post Infinix Smart 6 To Launch In Malaysia For Only RM369 appeared first on Lowyat.NET.