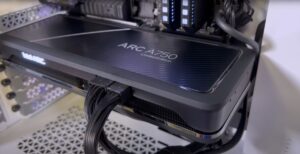 Well, this is interesting. Almost 24 hours after Gamers Nexus (GH) showcased Intel’s ARC A750 Limited Edition graphics card, the chipmaker officially made the decision to give the world a brief glimpse of its performance. How, you ask? By releasing one of several videos that are set to detail ARC’s prowess over the coming weeks.

Specifically, the preview of the A750 Limited Edition’s performance comes in the form of a short 3-minute video, hosted by none other than Ryan Shrout, who is a part of Intel’s ARC Graphics Marketing. Again, the content that Intel is planning on releasing will be on a week-to-week basis, from the point of the video’s release and, at least, until the release of the card.

Once again, the preview of the A750 Limited Edition is simply that, a preview. The game Shrout is using here is CD Projekt Red’s (CPPR) neon-heavy title, Cyberpunk 2077, and at a maximum resolution of QHD (2560 x 1440). The end results of the in-game benchmark shows that the ARC GPU is able to sustain an average framerate of 60 fps, while its average minimum frame count capping at 50 fps.

As impressive as that is, it should be noted that, while Shrout’s preview of the A750 Limited Edition shows the card running at the game’s “High” presets, it doesn’t seems to account for ray-tracing, of which the game is absolutely and perfectly capable of executing. It’s interesting, because back when Intel made it official, the chipmaker sounded giddy with excitement, telling the world about how its first-ever graphics card would be able to harness the graphics feature, along with its own AI upscaling technology, XeSS.

On another note, Shrout also seemed to make clear that the A750 Limited Edition would be on par with NVIDIA’s own GeForce RTX 3060, which is essentially the GPU brand’s entry-level to mid-range card. It’s a comparison that kind of makes sense, given that Intel itself officially confirmed that its top-of-the-line A770 GPU would only be on par with an RTX 3070 Ti, at best.

In any case, you can check out Intel’s weekly posting about ARC via its new repository. Hopefully, we’ll get a chance to play around with the A750 Limited Edition, once Intel makes the card more readily available outside of China.