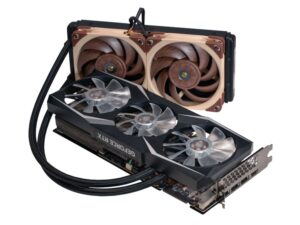 Custom liquid-cooled graphics cards with AIOs aren’t exactly new on the market, and almost all PC manufacturers offer the option in one form or another, be it for an NVIDIA or AMD GPU. What isn’t as common, though, is a custom-made AIO cooler with a total of five fans.

The custom-cooled card in question is a GeForce RTX 3090 Ti that is being offered by the Japan-based prebuilt-PC maker, Sycom. Specifically, the card itself is part of the company’s G-Master Hydro PC lineup and as you can see, the custom card uses a combination of Noctua and Asetek 120mm fans.

Specifically, the card itself is cooled with the three Asetek fans, while the attached 240mm radiator is cooled by two 120mm Noctua NF-A12X12 ULN fans that are known for their low noise levels and 1200RPM spin rate.

Unsurprising, Sycom doesn’t provide any specific figures for the card, but it does claim that its configuration and tweaks enables the RTX 3090 Ti to operate 15°C cooler under load, compared to other custom-cooled cards on the market. In addition and with the more efficient cooling method, the card’s frequency is expected to run at higher sustained rates, despite not being factory overclocked.