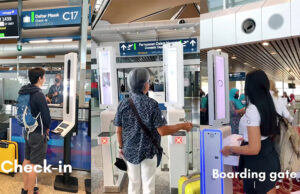 Malaysia Airports Holdings Berhad (MAHB) has officially begun the implementation of facial recognition technology in KLIA and KLIA2 which aimed to deliver a more seamless boarding experience to travellers. With the new system, passengers can just scan their faces instead of using a boarding pass to go through the security area and the boarding gate.

The initiative was first announced last January, with MAHB saying that it would implement the facial recognition system at 50 self-check-in kiosks, 20 check-in counters and 56 eGates at both airports within the first half of 2022. For now, the system can only be used for selected flights in KLIA though.

To utilise the system, passengers first need to register themselves by going to the Enrolment Totem located near KLIA’s departure level entrance. When registering, you will need your boarding pass and your MyKad or passport. Apparently, the camera will also perform a “liveness check” for verification, though we’re not sure what that really means.

Children aged 11 years and younger will still need to go through manual check-in, meaning families travelling with infants won’t be able to use the new biometric system. Nevertheless, MAHB claims that the technology is accurate enough to differentiate identical twins.

Meanwhile, the company hasn’t announced any plans to implement the system in other Malaysian airports. MAHB also states that it doesn’t permanently store your biometric data and that your data will be deleted three hours after your flight departs.

Prior to this, AirAsia has also implemented its own facial recognition system called FACES at KLIA2 and the Senai International Airport in Johor. As opposed to MAHB, the airline does have plans to expand the system to all Malaysian airports as well as airports in other countries they operate in but the exact rollout timeline have not yet been revealed.