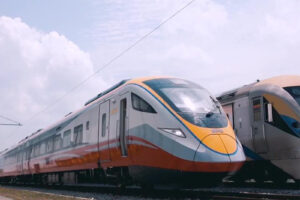 Local railway company, Keretapi Tanah Melayu Berhad (KTMB), has announced that it will be offering a special Keluarga Malaysia train service to the East Coast in conjunction with the upcoming 15th general election (GE15) from 18 to 20 November 2022. At the same time, eight additional electric train services (ETS) will also be provided throughout the same duration.

This newly announced initiative, as you’d may have expected, is aimed to facilitate Malaysians returning to their respective states to fulfil their responsibilities as voters during GE15. KTMB said a total of 716 tickets are offered for the special train, and 2,520 tickets for the additional ETS train services.

In a statement, the company revealed that the special train will provide round trips from KL Sentral to Tumpat Station, Kelantan and back. It will depart the former at 3:40 pm on 18 November and is expected to arrive at the latter around 7:40 am on the next day. The return trip to KL Sentral, on the other hand, will depart from Tumpat Station at 5:10 pm on 20 November and is slated to arrive around 11:26 am on 21 November.

Meanwhile, the additional ETS include trips between KL Sentral to Padang Besar Station, Perlis. Two trains are scheduled to depart from KL Sentral at 8:20 am and 8:50 pm on 19 November, which are expected to arrive at Padang Besar around 1:56 pm and 2:24 am respectively. There are also trips on 18 and 20 November that are scheduled to depart from 5:05 pm, and arrive at 10:34 pm on both days.

For vice versa, KTMB will only provide one trip from Padang Besar for each day. One of which is departing at 5:50 pm on 19 November, while those on 18 and 20 November are scheduled to depart at 11:00 am. These are expected to reach KL Sentral at 11:28 pm and 4:34 pm respectively.

Additionally, A separate one-way ETS travelling from Butterworth Station, Penang to KL Sentral is also available, but only on 18 November. This train will depart from the former at 9:00 pm, and is expected to arrive at the latter at 1:15 am the next day.

According to KTMB, tickets sales for the special train will open starting tomorrow on 2 November at 2pm, whereas bookings for the additional ETS are already available starting today onwards. Those who wish to purchase the tickets can do so via the KTM  Mobile application (KITS) or the official KTMB website.