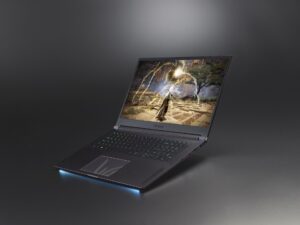 LG has unveiled something that may come as a surprise to many. The company earlier today announced its first ever gaming laptop, which will be released under its UltraGear line-up by early next year.

According to LG, the new gaming laptop – known as the UltraGear 17G90Q – features an aluminium casing, with a thickness of under 21.4 millimeters and weighing less than 2.7 kilograms. Under its lid is a large 17.3-inch WQXGA IPS display with 16:9 aspect ratio, a resolution of 2560 x 1600 pixels, and up to 300Hz refresh rate. Based on the image provided, it will also come with a backlit full-sized keyboard with trackpad, and external lighting.

Under the laptop’s hood is an unspecified 11th Gen Intel Tiger Lake H Core processor, along with an NVIDIA GeForce RTX 3080 Max-Q for graphics acceleration. Also onboard will be RAM configurations of either 16GB or 32GB DDR4, and an internal storage capacity via a 1TB M.2 NVMe SSD.

Unfortunately, no pricing has been revealed for LG’s first gaming laptop, but the company promises to reveal more details during CES 2022 next month. In terms of availability, LG says the UltraGear will initially be available in the US and South Korea from early 2022, with other markets to follow. It is not known whether Malaysia will receive the new laptop at this time.

The post LG Unveils The UltraGear 17G90Q, Its First Ever Gaming Laptop appeared first on Lowyat.NET.