KUALA Lumpur City Hall (DBKL) and the Election Commission (EC) are working round the clock to prepare facilities that will be used for nomination and polling on Nov 5 and Nov 19 respectively.

In Kuala Lumpur, venues owned by DBKL as well as school halls will be used as nomination and final vote tabulating centres (see graphic) for the 15th General Election (GE15).

According to a DBKL officer, works are underway to ensure all facilities such as toilets, lighting and air-conditioning in DBKL-owned buildings are in tip-top condition.

“Most of the buildings are in good condition. However, last-minute checks are being done. 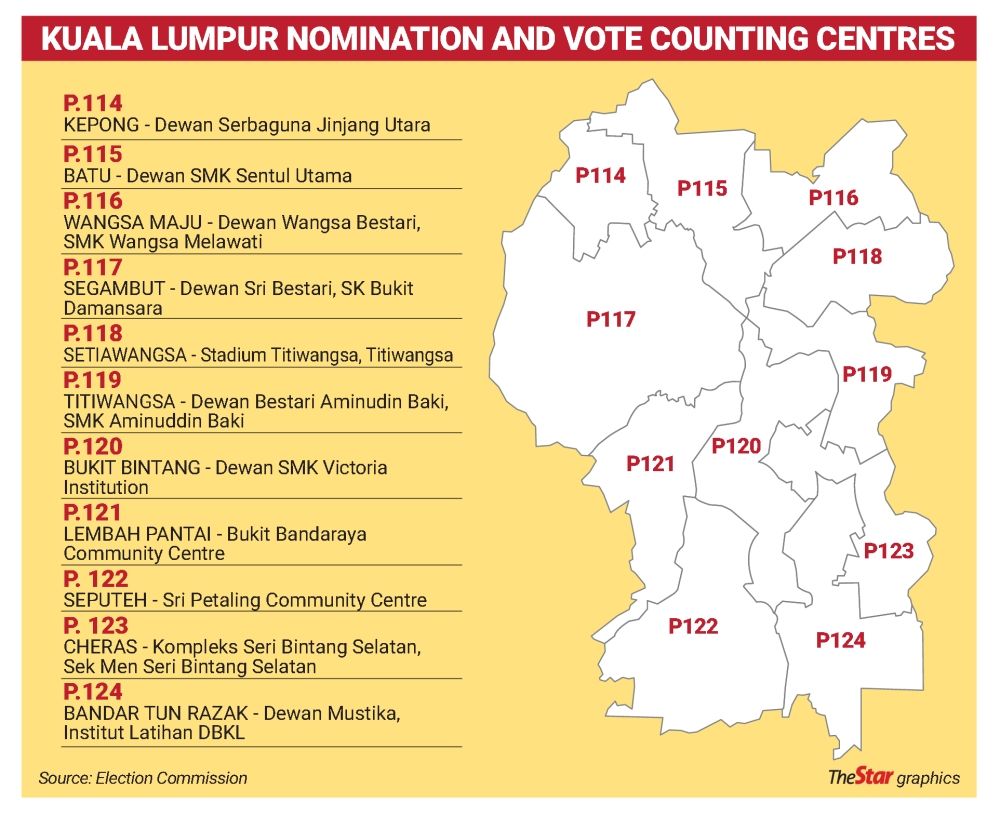 “Several hundred DBKL staff will be extending operational and administrative support to the EC on nomination and polling days.

“A briefing was carried out by the EC this week on the dos and don’ts,” the officer added.

The Federal Territories of Kuala Lumpur Land and Mines Office director and Kuala Lumpur Education Department officers will be returning officers for the Bukit Bintang, Titiwangsa and Cheras seats respectively.

DBKL said the police would ensure a smooth flow of traffic to polling stations on Nov 19.

“We don’t want to have any obstructions which could result in voters not being able to enter certain roads to cast their ballots.

“We hope residents associations, Rukun Tetangga sectors and joint management bodies of strata buildings will remove all barriers on polling day,” he added.

“There are no boom gates or security checks near schools apart from the inner roads leading into residential areas, so we don’t see any issue there,” said Wong.

People with disabilities are urging DBKL and the EC to ensure voting centres are disabled-friendly.

“Every year disabled people, especially those in wheelchairs, struggle to get to voting centres.

“Once they get there, entering the building is also challenging,” said Independent Living and Training Centre Malaysia president G. Francis Siva.

“In some rural areas, voting centres are located in Tamil schools.

“Schools are generally one of the most inaccessible places for people with disabilities, and things have not improved even after so many years,” said Francis.

“Once again, I am pleading with the EC and local councils to instal ramps at entrances and exits of these buildings.

“If they can provide parking space for the disabled, all the better.

“Just do the basics to make the process of fulfilling our democratic obligation easier,” he said.

Malaysian Association for the Blind (MAB) chief executive officer George Thomas said it was less challenging for the visually impaired to cast their votes, compared to those with other physical disabilities.

“During GE14, the EC had a change of heart and allowed the visually impaired to be accompanied by a close relative to cast their votes instead of an EC officer,” he said, adding that MAB hoped this would be allowed again.

Seputeh resident Carol Yap, 78, hopes the EC will assign the ground floor in a multistorey polling centre for elderly folk and those in wheelchairs to cast their votes.

“It is always a struggle for me during the elections,” she said.

“I also hope to see adequate signage to help those who are voting for the first time,” he said.