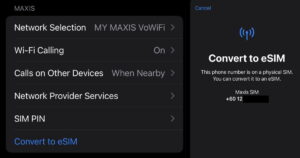 With a history of being the first telco to offer the iPhone to Malaysian consumers back in 2009 through iPhone 3G, it is not far-fetched to think that Maxis has a very close relationship with Apple. Hence, we were not exactly surprised to see the company being the only Malaysian telco that was able to provide the eSIM Quick Transfer feature to customers after the iOS 16.2 update was rolled out to users earlier this month.

However, it seemed that Maxis has since deactivated the feature in the same manner that it was made available to its customers: without any fanfare at all. First highlighted to us by Twitter user @neverthar and verified by @tcp_asdf who was among the first to previously point out Maxis’ eSIM Quick Transfer feature to Lowyat.NET, the telco has even removed references to the feature from the eSIM section of its website.

Instead of the step-by-step instruction, it has since been replaced with a notice that said “eSIM Transfer will be coming soon to Maxis. Stay tuned for more updates,”. However, if you can recall, we already included some of the images (shown below) from the instructions in our previous report:

Maxis has also removed the FAQ document regarding the eSIM Transfer feature from its website. That being said, Google still kept a copy of the document dated 19 December in its cache and we also have saved it here as a reference.

We have been seeing reports from users who have gotten their physical SIM card nerfed when they tried to make the switch to eSIM via this feature. They then have no choice other than to visit a Maxis Store outlet in order to make the conversion over there in person.

So, if we have to guess or speculate the reason behind its removal, it is possible that Maxis (or maybe Apple itself) is not happy with the feature’s current failure rate. As you may expect from the quiet disappearance of the feature, the telco didn’t publicly mention when it will be made available once again though.