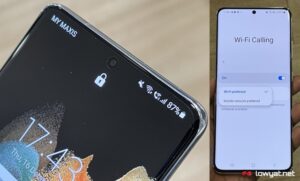 Maxis is officially rolling out Voice Over Wi-Fi (VoWiFi) feature to its postpaid and Hotlink customers starting from today onwards. This feature is also known as Wi-Fi Calling on certain phones such as Apple iPhone and Samsung Galaxy.

However, the actual availability depends on your phone. Maxis has noted in the FAQ on its website that VoWiFi is currently available for selected Android devices although the telco did not mention any specific names.

In our own experience, we were able to utilize VoWiFi on Samsung Galaxy S21 Ultra as you can see above but not on Galaxy Note 9 and Galaxy Note 20. On another hand, the telco specifically pointed out in the same FAQ that this feature is not yet available for iPhone models and is currently working with Apple to enable it for Maxis customers.

In addition to that, Wi-Fi Calling has not yet been listed under Maxis’ name on Apple’s website. That being said, several Lowyat.NET Forum members said that they were able to obtain the feature on their iPhones.

The availability of VoWiFi for Maxis customers is definitely a long time coming given that its competitors such as U Mobile who has rolled out the feature way back in 2016 which was then followed by Digi in 2017. Now that Maxis is finally on board, this left Celcom as the only major telco that has not yet provided VoWiFi capability to its users.

The post Maxis Finally Rolls Out Voice Over Wi-Fi appeared first on Lowyat.NET.