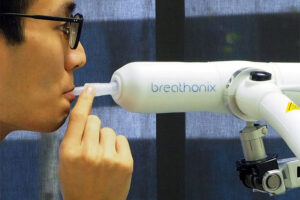 In a Bursa Malaysia filing, MyEG has announced that it has received approval from the Ministry of Health (MoH) to deploy a breath test system as an alternative COVID-19 screening method at the country’s entry points, such as airports. The deployment will be involving the BreFence Go breathalyser system from Singaporean firm Breathonix.

The system has received provisional approval from Singapore’s Health Sciences Authority earlier this year and has also made its way to Vietnam. While MyEG just got the nod earlier this week, it actually announced plans to bring the system to Malaysia back in May.

The system takes 60 seconds to provide the results after users exhale into a disposable one-way valve mouthpiece and It boasts an accuracy rate of 85.7%, as well as a sensitivity rate of 97%. According to Breathonix, the company is working on incorporating artificial intelligence into the system to improve its accuracy further.

Previously, MyEG has said that the breath test doesn’t even require medical personnel to be administered. Additionally, the company mentioned in its filing that when a user receives a positive test result, they will be required to take a PCR test for further confirmation.

MyEG doesn’t say exactly when and where the breath test system will be deployed but expects that it will contribute positively to the group’s finances from next year onwards. On a related note, a similar breathalyser device called i-Breath is currently under development through a collaboration between the Ministry of Science, Technology, and Innovation (MOSTI) and Universiti Teknologi Malaysia (UTM).