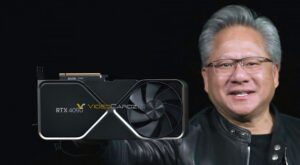 A screenshot of what appears to be the NVIDIA GeForce RTX 4090 Founders Edition (FE) has made its way online. The alleged images comes a full week ahead of the series’ official launch.

Much like its predecessor, the Ampere-powered RTX 3090, the RTX 4090’s shape and design are virtually identical, save for the fans that are being used. Specifically, the new fans being used for its Dual Axis Flowthrough have a bigger axial and less blades, suggesting an improved airflow design. For that matter, the fan design also matches up with the leaked image of the alleged RTX 4080 that leaked earlier this month.

Now, as much as we would like to take this picture of the RTX 4090 FE at face value, there are some issues we have with its authenticity. First off, the way the GPU looks superimposed in the foreground makes it seems as though the picture of Jen-Hsun holding the card looks like it’s been doctored. That, or the camera system being used in the pre-recorded video has some really fancy bokeh capabilities.

The second questionable part of the picture is the notch at the end of RTX 4090’s PCIe fins. Upon zooming in close, you can actually see a little bit of discolouration within the gap. It can be argued that that’s Jen-Hsun’s finger filling up the space, which explains why it is skin-coloured. The thing is, considering how the man is holding it, one would think that you’d be able to see his thumb a little clearer at the base of the card.

On an off-tangent note, that is one hell of a chonky card, so how he’s able to hold the RTX 4090 like that, says something about the man’s arm strength.

The NVIDIA GeForce RTX 4090 is expected to be announced on 27 September, during the GPU brand’s special GeForce Beyond broadcast. Until then, we do suggest that you consume this news with the usual amount of salt.