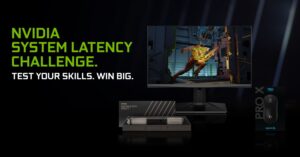 Do you believe that you have fast reflexes? Do you think you have what it takes to compete in a series of reflex-based challenges? If the answer to those two questions is yes, then you may want to take on the NVIDIA System Latency Challenge.

The challenge NVIDIA is collaborating with The Meta, and as the name suggests, players will undergo two latency experiments: Latency Frenzy and Latency Flicking. Both are designed to test out a gamer’s in-game reflexes.

Technically speaking, the challenge uses The Meta’s KovaaK 2.0, which is regarded as one of the world’s most popular aim trainer, and is used by professional gamers, streamers, and competitive gamers alike. That, and it also incorporates NVIDIA’s Reflex SDK.

With the combination of the two technologies, the challenge will run a simulation for three latencies: 25ms, 55ms, and 85ms. In the Frenzy experiment, gamers will need to destroy three red targets as fast as they can, across the three latencies. The Latency Flicking experiment is a bit more challenging, requiring players to “flick” their targetting reticle and destroy a blue dot – again, across all three latencies – followed by a red dot that appears for a period of 600ms.

So, if you think you got what it takes to dominate the latency challenge, you can download it via Steam and get right into it, which is free to play for a week, starting today. As for who can compete, NVIDIA says that gamers with a system running on a GeForce 900 series card or newer will be able to participate.

Of course, what is a challenge without some form of prizes and to that end, participating gamers will have a chance to win one of three prizes: an NVIDIA GeForce RTX 3080 Ti Founders Edition, an Oculux NXG253R 360Hz NVIDIA G-Sync Display, or a Logitech Pro X Superlight Mouse. Do note that there are nine units of each prize, making that a total of 27 winners. To make it fair, winners will be selected at random from the leaderboard.

Winners will be selected in January, with their prizes shipped out to them by February. Having said that it is also important to mention that Malaysian participants won’t have the opportunity to win any of the prizes.

The post NVIDIA Launches System Latency Challenge In Collaboration With The Meta appeared first on Lowyat.NET.