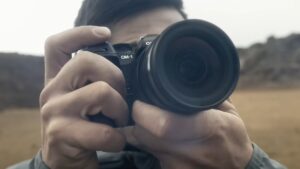 OM Digital Solutions, which is basically Olympus’ camera business reborn under a new ownership, has officially unveiled its first ever product: the OM System OM-1. Continuing the legacy of its predecessor, the new shooter is introduced as a flagship Micro Four Thirds mirrorless camera.

While it is considered as a spiritual successor to the OM-D series, the OM-1 still carries the Olympus name as a tribute to the brand. However, according to DPReview, OM Digital Solutions revealed that this model will be the only camera to do so moving forward.

The company’s nod to its former brand doesn’t end there either. As a matter of fact, the shooter shares the same model name as a popular Olympus 35mm SLR camera that launched in 1972 – celebrating the 50th anniversary of the original OM-1.

Also onboard is a new noise processing technology which grants the camera to maximise its normal ISO sensitivity to 25600, which can be further expanded to 102400. Video-wise, the OM-1 is capable of recording 4K videos at 60 fps for up to 90 minutes while on battery, and up to two hours when plugged to an external power source.

The new camera’s design will definitely strike a familiar chord with Olympus fans, save for some elements that have been redesigned. In addition, it comes with an IP53 rating for water and dust resistance, which is ideal for outdoor shoots.

Located on the back of the OM-1 is a 5.76M dot OLED electronic viewfinder with adaptive brightness technology, and a 3-inch vari-angle OLED touchscreen display with a generous 5.76M dot resolution. The latter also features a reworked user interface for its various onboard settings and so on.

The OM System OM-1 is priced at US$ 2,199 (~RM 9,203) for body only, and US$ 2,799 (~RM 11,714) as a kit bundled together with a refreshed M.Zuiko Digital ED 12-40mm lens. OM Digital Solutions says the new camera is expected to be shipped out by early March, but its potential availability in Malaysia has yet to be confirmed. However, it is worth noting that the OM-1 is listed in the local version of the OM System / Olympus official website.