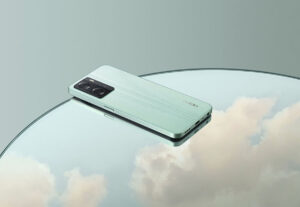 OPPO has recently introduced the OPPO A57 for the Malaysian market during the weekend. It is a new entry-level smartphone which features a MediaTek chipset, a decently sized 6.56-inch display and a 5,000mAh battery, among other features. Additionally, the phone is also a current-gen iteration of the original model that was released by the brand all the way back in 2017.

For starters, the new OPPO A57 sports a notched 6.56-inch display with 1612 x 720 pixel HD+ resolution, 60Hz refresh and touch sampling rates, and 89.8% screen-to-body ratio. Featured onboard is a side-mounted fingerprint scanner, ultra-linear stereo speaker, a USB-C port for charging and data transfer, and a 3.5mm headphone jack. The phone is also rated IPX4 in terms of water resistance, and is offered in Glowing Green and Glowing Black colours.

Under its hood is a 4G-enabled MediaTek Helio G35 quad-core chipset with an IMG GE8320 GPU, as well as 4GB of LPDDR4X RAM and 64GB of eMMC 5.1 internal storage. The latter can be expanded further up to 1TB via a microSD card. Besides that, the handset also comes with Wi-Fi and Bluetooth 5.3 connectivity, as well as Android 12 out of the box via the brand’s ColorOS 12.1 platform.

Meanwhile, powering the OPPO A57 is a 5,000mAh battery, which features 33W SuperVOOC fast charging support via USB-C. The company claims that a full top-up would only take 72 minutes, whereas a 10 minute charge is enough for 2.87 hours of YouTube streaming.

On the imaging side of things, found on the back of the phone is a dual camera setup consisting a 13MP f/2.2 primary and a 2MP f/2.4 mono sensor. Situated within the display’s notch, on the other hand, is an 8MP f/2.0 front-facing camera. Both front and rear cameras are capable of recording 1080p and 720p videos at 30 frames per second.

The OPPO A57 is now available at a recommended retail price of RM 699. Those interested may purchase the brand’s new entry-level smartphone via OPPO’s official stores nationwide, its online store, authorised dealers, as well as its official stores on e-Commerce platforms including Shopee and Lazada.

The post OPPO A57 Entry-Level Smartphone Launches In Malaysia For RM699 appeared first on Lowyat.NET.