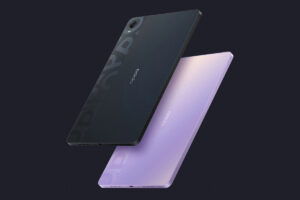 Alongside the launch of its new Find X5 smartphone series, OPPO also officially introduced its first ever Android Tablet, the OPPO Pad, as a China-only reveal. As you may recall from our previous report, the device’s design was initially unveiled only a few days prior to last night’s event.

The new OPPO Pad sports a modest 11-inch LTPS LCD display, featuring a resolution of 2560 x 1600 pixels, HDR10 support, and 120Hz refresh rate. It also comes with a flat-edged metal frame and frosted glass rear panel with a dual-tone finish – offered in black and purple colours, as well as a limited silver version known as the Artist Edition. OPPO says the tablet is just 6.99mm thick and weighs 507 grams.

Powering it is a Snapdragon 870 chipset, paired together with up to 8GB of RAM and up to 256GB of internal storage. Unfortunately, the OPPO Pad does not support expandable storage via microSD. Battery-wise, the tablet features a decent 8,300mAh capacity with 33W fast charging support via USB-C.

As for imaging, on the back of the new device is a 13MP primary camera, while housed within the side bezel of its display is a 8MP front-facing selfie camera. Besides that, it also comes with a Dolby Atmos and Hi-Res audio certified quad speakers, ColorOS for Pad (based on ColorOS 12), a multi-screen collaboration option for compatible OPPO phones, and support for the brand’s new stylus accessory.

Speaking of which, introduced together with the tablet is the OPPO Pencil, which is offered separately. The new stylus features 4096 levels of pressure sensitivity, is able to last up to 13 hours of usage on a single charge, and can be attached to the OPPO Pad magnetically for storage and wireless charging. Additionally, the brand also unveiled an optional keyboard case for the tablet.