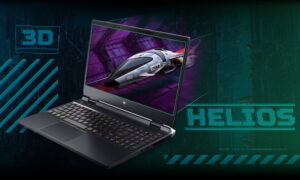 Even though 3D stereoscopy has been around for quite some time, it seems that there is still some attraction to it as you would hear tech companies create something out of it from time to time. Among the latest example is Acer who announced the SpatialLabs glassless stereoscopic 3D technology in May last year.

At that time, the tech was revealed through a ConceptD prototype laptop. Several months later, the company then unveiled the first actual product to feature the tech in the form of the ConceptD 7 SpatialLabs Edition.

Originally, the tech was aimed at content creators, designers, and professionals. Fast forward to earlier this week, Acer then announced that it wanted to bring the stereo 3D technology to gamers as well which led to the creation of the Predator Helios 300 SpatialLabs Edition gaming laptop.

Announced alongside several other new products at the next@Acer Global Press Conference which also includes the Swift 3 OLED, one of the main elements that allow the laptop to deliver glassless stereo 3D is a pair of cameras that have been fitted into its upper display bezel. Both of them essentially track the movement and position of the user’s head as well as their eyes.

Another critical element that helps the Predator Helios 300 SpatialLabs Edition do its job is the SpatialLabs TrueGame application. The app essentially carries pre-configured 3D profiles for games that can work with SpatialLabs which is said to be over 50 AAA tiles with new games being added to the list on weekly basis.

Naturally, the laptop also supports other SpatialLabs applications too such as the SpatialLabs Go which allows the user to view 2D images, videos, or pretty much anything on its screen in stereo 3D. There is also the SpatialLabs Player and SpatialLabs Model Viewer that are meant for videos and 3D models, respectively.

The Predator Helios 300 SpatialLabs Edition is also equipped with a 15.6-inch IPS display that is able to deliver the glassless stereo 3D experience with a resolution as high as 2160 x 1920 although the refresh rate will be limited to 60Hz in this mode of operation. When switched to the standard mode, the display actually has a 4K native resolution although its maximum refresh rate was not revealed by Acer.

When it comes to other hardware, the 3kg gaming laptop can be obtained with up to Intel Core i9-12900H, NVIDIA GeForce RTX 3080 graphics, 32GB dual-channel DDR5-4800 RAM, and 2TB PCIe Gen 4 NVMe solid state drive in Raid 0 mode. Acer has also chosen Mini LEDs to provide the backlights for the laptop’s keyboard which is said to be brighter, more uniform in colour, and consumes less power.