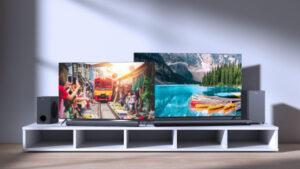 PRISM+, a Singaporean tech consumer brand known for its display products, has recently announced two new audio devices for the Malaysian market. These consist of two home cinema-oriented soundbars, namely the premium Symphony model and the entry-level Flow model. Both of which are slated to arrive in locally next month.

To start things off, we have the PRISM+ Symphony, which the brand says will feature best-in-class technologies. The soundbar features a total of 11 upward-firing 5.1.2 speakers for sound separation, providing a power output of 760 watts and promising high quality audio performance, as well as deeper and fuller bass without distortions at higher volumes.

Also onboard are support for numerous enhancements such as Dolby Atmos spatial audio, Dolby Digital, Dolby Digital Plus, and Dolby TrueHD. Additionally, the Symphony comes with an HDMI-eARC port that will allow users to play high fidelity audio, and is accompanied by an 8-inch wireless subwoofer.

The second device is the Flow soundbar which, as mentioned earlier, falls under the entry-level range and features a more compact design than its sibling – making it ideal for desktop setups and smaller rooms. That being said, PRISM+ touts it to be the one of the few in its class to come with a wireless subwoofer for added audio enhancements. This model comes with a 2.1 speaker with 240 watts peak output powered by Dolby Audio technology, which includes Dolby Digital and Dolby Digital Plus.

PRISM+ says both the Flow and Symphony feature five preset modes including News, Music, Sport, Gaming and Movie, which provides users with plenty of customisation options for their listening enjoyment. In addition, the duo also come with adjustable LED brightness, and can be navigated via TV remotes to ensure a seamless home cinematic experience.

The PRISM+ Symphony and Flow soundbars are slated to be shipped in Malaysia by mid November 2022, with pre-orders now available via the company’s website, retail store at Sunway Pyramid, as well as its official online stores on Lazada and Shopee. Pricing-wise, the former model is set to retail for RM 1,999, while the latter is going for RM 799.

The post PRISM+ To Release Two New Soundbars In Malaysia This November; Price Starts From RM 799 appeared first on Lowyat.NET.