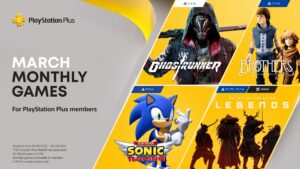 PlayStation Asia has revealed the free games for PS Plus subscribers next month. While we are getting four games in total, there’s one game that’s different, compared to what the US side subscribers are getting.

To start off, we have cyberpunk first-person platformer Ghostrunner leading the lineup as the PS5 title of March. Following that, there’s Team Sonic Racing as well as Ghost of Tsushima: Legends, the fun multiplayer component of the really great base game. In case you missed it, the mode got its standalone release back in September last year.

PlayStation Plus games for March:

Brothers: A Tale of Two Sons

And for this month only, Ghost of Tsushima: Legends is available as a bonus title. pic.twitter.com/f5Q6B8ydix

As mentioned earlier, we have one game on the list that’s a little different, and it’s Brothers: A Tale of Two Sons. According to the international PlayStation Twitter account, the US is getting Ark: Survival Evolved as their free PS Plus game instead. Some may find this a little unfortunate, as they might have preferred the latter. But consider it a fair tradeoff for the fact that we got Judgment in December, when the international market didn’t even get a fourth game.

At any rate, this also serves as a reminder to claim this month’s free games while you can. These last until the last day of the month, 28 February. March’s list will be available between 1 March and 4 April.

The post PS Plus Free Games For Subscribers In March Includes Ghostrunner appeared first on Lowyat.NET.