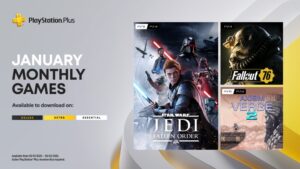 The new year will be rolling around next week, and it’s also the week for PS Plus subscribers to get their free games for the month. No surprises this time around, as it looks like what we will be getting will be the same as the international community, according to what PlayStation Asia has announced.

This means that Star Wars Jedi: Fallen Order will be headlining the free games for PS Plus subscribers next month. A game that should need no introduction if you’re into the Star Wars franchise, but for those who do it’s effectively a Soulslike entry for the now Disney property. And a very good game by most accounts, despite what publisher EA has done with the franchise throughout its exclusivity deal.

On one hand, the timing of this game being free is great, since the sequel is scheduled to be released in March. On the other, this is not so great if you got it as part of the still ongoing Steam Winter Sale.

Another game on the PS Plus free games list is Axiom Verge 2, and indie Metroidvania released last year. It too is a game that is viewed quite favourably in general, with a wacky plot line of its own, making it worth at least checking out.

Your PlayStation Plus Monthly Games for January 2023:

And finally, there’s Fallout 76, the game that had a multiplayer component forcefully shoehorned in. You can technically play this as a typical game in the entry, but some features like VATS work differently (read: not properly). Then there’s the whole monetisation side of things.

At any rate, PS Plus subscribers will be able to claim these three games starting 3 January, up until 6 February. If you haven’t claimed this month’s games, this is your monthly reminder to do so before it’s too late.

The post PS Plus Subscribers To Get Star Wars Jedi: Fallen Order In January 2023 appeared first on Lowyat.NET.