PETALING JAYA: Society is seeing a decline in civic consciousness and it is perhaps time for Malaysians to look the man – or woman – in the mirror, say experts in a variety of disciplines.

This decline is due to factors such a lack of faith or education, or a poor upbringing, said Universiti Kebangsaan Malaysia (UKM) Prof Emeritus Datuk Dr Teo Kok Seong. 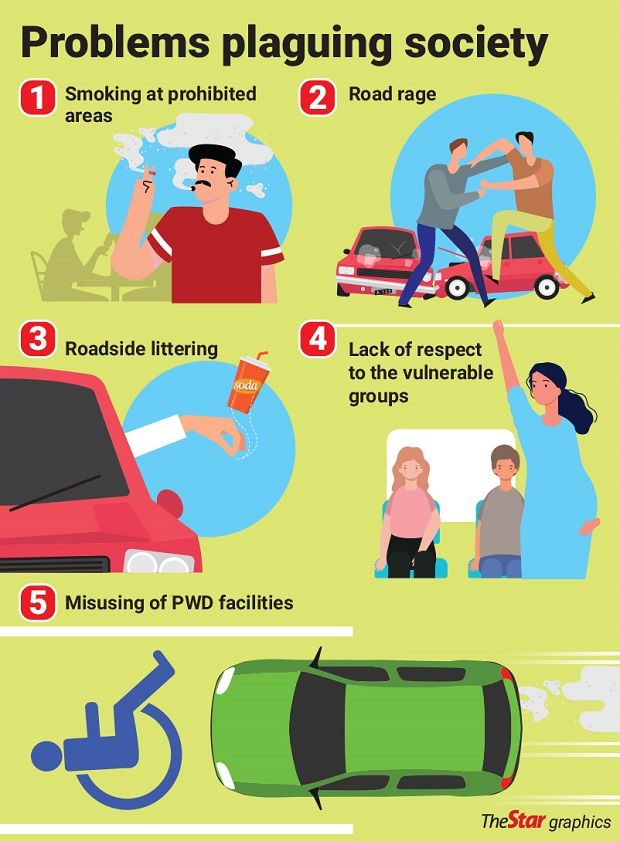 “Parental carelessness is another reason,” he added.

As an example, he said that some parents might not have guided their children in differentiating between right and wrong.

“In a nutshell, parents are morally responsible for their children’s actions and behaviour,” said Prof Teo, who is principal fellow at UKM’s Institute of Ethnic Studies.

He said a parent’s sensitivity towards other people’s feelings and to injustice can greatly influence the moral development of a child.

Discipline is important as well, he added, as in when an adult steps in to correct a child’s wrong behaviour.

“Education is a powerful tool for social thinking and transformation. For this to happen, we need an inspired curriculum that can shape the thoughts of our young minds.

“We need teachers who shape not only the thoughts of students in understanding, but also in appreciating, moral values,” he said.

Education, added Prof Teo, has a significant effect on moral reasoning and in building a child’s character.

“Teaching morals is not merely about religion and rituals,” she said.

As for behaviour on the road, she said that reckless and irresponsible driving, a sense of “owning the highway” without caring for the safety of others, ignoring pedestrian crossings, and showing impatience at an elderly person crossing the road slowly are some examples of declining moral values.

“All these are indications of a morally-abject society.

“Every society has citizens who are selfish, but these problems must be addressed by education – provided we have the right teachers,” she added.

Sharifah Munirah said the education system is not doing enough to create moral values among citizens.

Universities, she said, should not just churn out employable graduates or good researchers but are also supposed to nurture human beings who understand how to live and not only how to secure a livelihood.

“Understanding how to live means incorporating moral values into one’s life, over and above acquiring skills for a specific career and the ambition to succeed and be self-sufficient.

“Part of this moral education involves teaching society that excess is often undesirable,” she added.

She said that most public universities would evaluate lecturers’ performance based partly on the number of students they supervise.

“So, the more PhD students a lecturer supervises, the higher their assessment record during their careers.”

She feels that some of the theses written by PhD graduates were of poor quality.

“The lecturers who supervised them probably know this, but they say or do nothing. All that matters is their annual assessments and their hope for promotion,” claimed Sharifah Munirah.

She also argued that moral decay is closely connected to endemic corruption.

“Corruption is the root from which all other forms of immorality in our society emerge and prevail.”

Educationist Prof Tan Sri Dr T. Marimuthu, adjunct professor at the School of Education and Cognitive Sciences at Asia e-University, said citizens must work together to provide a culture conducive to ensuring a decent society.

They should not rely solely on schools to educate the young on morality and civics, he added.

He said there are several ‘agents of socialisation’ that need to play their roles.

“The family is the most important agent of socialisation transmitting moral values.

“Children, adolescents and even adults should know what’s right and wrong, which comes from the family,” he added.

Prof Marimuthu said that schools play a reinforcing role by ensuring that these home values are in tandem with the values taught in the institution.

“The school is a moral institution to produce a productive individual. One of the ways that teachers can teach moral values is by picking out moral issues from a subject and discussing them with students.

“This way, students will have a better moral comprehension of the subject instead of just studying for exams,” he added.

Civics was first introduced by the Education Ministry as a specific subject as early as in 1953.

However, under the Malaysia Education Blueprint 2013-2025, the subject was removed from the curriculum and integrated into major subjects such as Moral, Islamic History, English and Bahasa Melayu.

“Each one of us has roles and responsibilities to play in order to maintain morality in our society,” he added.